UK election: vote Labour and SNP to stop the Tories 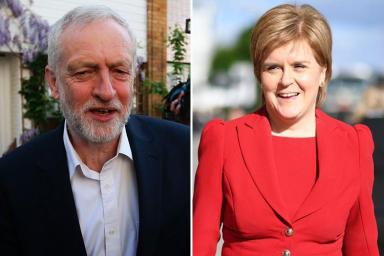 Tomorrow’s general election in the UK will have an impact beyond the narrowing borders of the growing white nationalist parochialism that has infected Britain from left to right.

A Tory victory would be a disaster, contributing to more instability and devastation in the global South, through wars, dodgy deals, and rapacious moves to protect British multinationals’ investment.

Theresa May is the European counterpart of her close ally, Donald Trump: erratic, careless, fascist and racist. Neither of them can stand their ground when challenged in conversations lasting more than two minutes.

May brings together the worst of white nationalism with the worst of neoliberal austerity. Her government would aggravate the epidemic of militant racism and hate crimes that has been spreading in Britain for some time now.

In England and Wales, the most viable alternative to the Tories is Jeremy Corbyn’s Labour. What they offer is inadequate and their agenda has significantly turned right, especially on migration and security.

But Corbyn would be a much better counterpart to soften the Brexit deal. His anti-war credentials will at least ensure that he won’t do anything rash to inflame an already explosive situation in the Middle East and North Africa. The Labour manifesto also mentions decisive action on tax havens, where British banks play a huge role and help Western corporations and rich individuals pillage Africa’s wealth.

In the seats where Greens have a chance, it will be important to support them and have their voice represented in parliament.

In Scotland, the Scottish National Party is the best bet. Unlike Labour, they have not betrayed their pro-migrant, anti-Brexit stance. Their push for an independent Scotland within the EU makes more sense than Brexit Britain going far right.

Labour’s spectacular come back in the polls means that it is possible that the Tories will lose their majority in the House of Commons. An even better outcome would be if Labour, SNP, Greens and others will have the numbers to form an anti-Tory coalition government. A lot will depend on whether young people, who are overwhelmingly anti-Tory, will show up in numbers at the ballot box.

If you have the right to vote in Britain, make sure you vote to stop the Tories.

This entry was posted in UK politics, World and tagged jeremy corbyn, snp, stop the tories, theresa may, uk election. Bookmark the permalink.